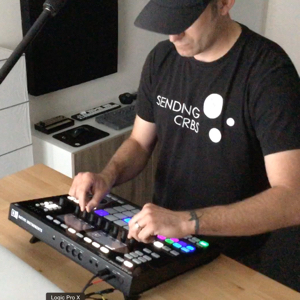 Audio version of the set:

This live set has been a long time coming, something I’ve been trying to do with different gear for awhile now.  After bouncing around for what seemed like forever trying various different set ups, I finally decided that the Maschine Studio controller would be something I could really dive into.

This entire set was created and performed entirely using the Maschine Studio controller, the laptop was closed the entire time as I wanted to treat the set as if it was purely done on hardware.   There was an NI limiter on the master channel in Maschine, otherwise this was recorded directly from Maschine with no additional processing after the fact.

An earlier attempt at doing this showed me I needed to really pay attention to my CPU usage, it’s easy to get carried away using lots of the bigger plug ins from the library.  I have Maschine set up so that each Group is a basically a separate song, so I need to have enough CPU available to load 8 songs at once in effect.

I started by keeping the drums mainly sourced from samples, both in the Maschine library, and some of my own found sounds (more on this later).  Other than the kick drums, most of the percussion and cymbal noises are various odd sounds I sampled in various forest preserves near where I live.  Editing, tweaked, effected, and pitched all over of course.

I used “Group I” in Maschine to host a global delay and reverb, and sent just about everything through that to save more power.  There was also a few filters, EQs, a transient shaper, and delay on the master channel.  These were assigned to Master Channel macros so that I could effect the entire sound of the set if I wanted to.

This left me plenty of CPU I found to get a bit more indulgent with some of the instrument sounds.  Time to dive into Massive and some of the new content in the Komplete Select sounds from the Maschine v2.3 update recently.

This video was actually my very first trial run of the set.  I was mainly trying to see if the cameras would record long enough, and if Maschine could handle running that long as well.  I ended up having so much fun I just went for it, and happily all the camera and audio aspects worked as expected too.  I still have quite a bit more I want to do to fine-tune the set and a couple of the songs, but I’m still really happy with how it turned out.

Maschine Studio ended up being a lot better than I expected from a performance standpoint.  Doesn’t take long to really start knowing your way around, and with things like the mixer, macros, and synth tweaking only one button press away, I was surprised at how quick I could move around to keep the set as fluid as possible.  Good stuff, and I look forward to doing some more live music with this set up!

Hope you enjoy the music!
Tarekith