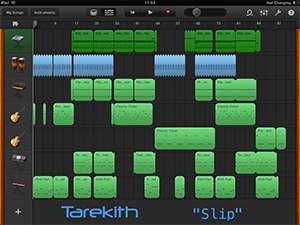 As I mentioned in my Touching Matters blog post a couple weeks ago, I recently got an iPad2.  One of the apps I was most interested in trying out was Apple’s new Garageband for the iPad, as I know the desktop version is usually under-appreciated considering how much it can do for the price.  So I decided to see how much I could do by writing an entire song in just that one app on the iPad.

For the most part it was a very enjoyable process, and I was able to complete the track in only a few days without once opening the help documentation.  You don’t get a lot of instruments in the iPad verison, but the ones they do give you are pretty good sounding and fun to play, and they cover a good range of sounds too.  The Smart Guitar in particular was more fun than I thought it would be, and the best part is that you can ignore all the default picking patterns and just play it manually yourself (which is what I did in this song).

At first I was a little bummed out that you can’t go back and edit anything you’ve recorded, at least not on a piano role like on the desktop version (or any DAW for that matter).  However, if you zoom in a lot, you CAN edit the regions by slicing them into smaller regions, cutting and pasting them where you want, and then rejoining them into new regions.  So you still have quite a bit of flexibility when it comes to editing, provided you have the patience to work that way.  Reminded me a lot of my old SP808 back in the day, so it wasn’t a huge deal for me.

It wasn’t all fun and games though, there were some frustrating moments too.  For instance, without per track effects (you only get a globel reverb and delay) or EQ, balancing everything was a little rough at time.  All of the instruments are very full sounding, so they can tend to mush up on the low end when you add enough together.  This track only uses 7 of the available 8 tracks, and I had to fight that a little bit.  Especially with the drums, the low end on the kicks and toms is monsterous!  Luckily the Classic Drum Machine kit I used offers a high pass filter, so I was able to tame most of the subby low end (still a touch much for my own liking though).

More discouraging though, was the fact that the much hyped ability to import projects created on the iPad into Garageband on the Mac didn’t work correctly.  The guitar parts in this song did not play right at all on the Mac version, despite the fact that I’m using the latest versions of both.  Notes were skipped, and the string bends I played in the drop and outro were ignored on the Mac.  That was a let down, as I was forced to record this via the headphone out on the iPad.  Still sounds ok, but not as good as a direct render would have sounded I’m sure.

Anyway, the version you hear is recorded straight from the iPad2 with no additional processing other than normalizing to -0.3dBFS and converted to 320kbps MP3.  I dind’t do any mastering on file, this is exactly how it sounds straight from the app.